A very interesting biography of an Irish Tramp full of Sarcasm and Sadness.
Highly recommended book.

BlG DICK BUTLER is an original living character right out of Hell’s Kitchen who is not to be confused with Trader Horn, Baron Munchausen or Sinbad the Sailor. What he relates is the gospel truth, mellowed and strengthened by age like the whiskey of which he is so fond. What a memory the man has! He remembers not only the nice things that prim people store away among their souvenirs but a variety of happenings that are startling, indiscreet and highly unethical. Why the man has no shame, you will say, and correct you are. Dick Butler lost his conscience in the cradle and he never regained it. He didn’t even try to find it. In politics and the dock walloper’s rough and ready world, he quickly learned a conscience was no great help to progress.

For unabashed frankness, the memoirs of Butler are akin to the “Confessions” of Jean Jacques Rousseau. The comparison would please Butler. Not long ago he picked up a copy of Rousseau at a cut-rate Times Square shop because the book was cheap, and he reads it over and over because he thinks Jean was one swell guy, a bozo who was content to be himself and not a plaster saint.

Seemingly Butler knows more people in all ranks of human society than any other New Yorker. He’s on to everybody along Broadway and he’s equally at home over in Hell’s Kitchen or down at City Hall. He has friends among Governors and gangsters, politicians and thieves, judges and con men, cops and palookas, authors and actors, rum runners and speakeasy folk, showgirls and waitresses.

In politics, business and sport he knows Who’s Who and also Why. He is the Peck’s Bad Boy of the Big City. He has been on familiar terms with Presidents and Mayors. He has rubbed shoulders with reformers, grafters, gamblers, and bawds. He was never one to be choosey about his company. He is no saint, as he himself says; he is a bit of a rogue and a rascal, and most charmingly so. He broke into politics under the colorful Big Chief Devery and was elected to the State Assembly by the simple expedient of bashing skulls and having his army of repeaters cast ten ballots at a time. Politics was a springboard from which Big Dick proceeded to dive in all directions— into the leadership of the longshoremen’s, ironworkers’ and teamsters’ unions, the opening of one saloon after another and the promotion of enterprises ranging from boxing to rum-running. 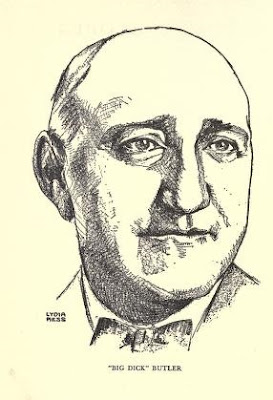 His literary associations were precious. He was waiting to guide David Graham Phillips to local color around the docks when Phillips was assassinated by a maniac. He was asked by Frank Harris to smuggle “My Life and Loves” into this country. It was as a favor for his friend, Alfred Henry Lewis, author of “Wolfville,” that he kidnaped Harry Thaw from Matteawan. “I’m one of those fellows who never like to see anybody in trouble,” says Dick. “When I see a fellow in trouble I’m sorry for him and try to help him out.” That’s Big Dick’s guiding philosophy. He is a sort of direct-action Clarence Darrow who would empty the jails and prisons if he could. In helping others out of trouble, he involves himself in reckless undertakings, but a reckless life appeals to his untamed nature. His Celtic humor keeps him from taking himself too seriously.