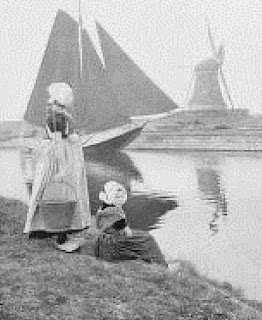 Americans have a genuine affection for Holland. We like to study her history, we sympathize with her struggle for independence, and we compare her national hero — the great Stadthouder William the First of Orange — with our own hero, George Washington.

We remember that when the Pilgrim Fathers fled from England it was the Dutch who welcomed them and gave them asylum for twelve years. Our historians tell us that these same Pilgrim Fathers brought with them to America new ideas about liberty of conscience, State rights, and local self-government, which they had learned from the Dutch and that these very principles were woven into our Constitution in such a way that they became the foundation of our national existence. We are proud, too, of our Dutch ancestry and of our illustrious Americans of Dutch descent.

And we like to dream of the picturesque Holland of to-day: of the seas of green fields, of the peaceful grazing cattle, of the tiny red-roofed villages, of quaint costumes and wooden shoes, and of the aristocratic windmill silently watchful. And yet, in spite of our fund of information, we seem to know little indeed about modern Holland, her system of government, her schools, and universities, her arts and sciences, the development of her great cities, her world of finance and financial institutions, nor have we given much thought to the extent of Dutch agriculture, or to the splendors of the Dutch colonial empire and the wealth and opportunities that lie hidden among the forests, plantations and mineral resources of Java, Sumatra, and Borneo. This volume — “Modern Holland” — has been prepared with a view to enlighten us in America about our friends and contemporaries, the Dutch people of to-day. Here we see them at work and at play, vigorous and proud of their splendid traditions, yet prouder still of their country as they find it in the Twentieth Century.

The various chapters reveal to us that the Dutch are businessmen like ourselves, that they are international traders and carriers, that they have a splendid merchant marine, and that we have much to learn from them in matters of business and in the art of living. We find that they attach the same importance to education as we do, that they are healthy in mind and in body, and that they have the same regard for truth and fair play that we have. We reach the conclusion that there is far more in common between Americans and Dutch than we had suspected and that we can whole-heartedly co-operate with them for our mutual advantage and for the betterment of the world in general.

Contents of the book:

I. Something about our Geography 9

II. How the Country is Governed 25

III. Something about our Spiritual and Social Life 37

IV. In the Realm of Dutch Arts and Sciences …. 48
V. Dutch Agriculture, Cattle and Fish 82