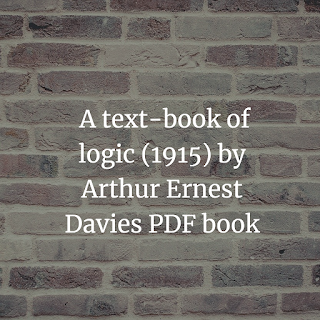 The time has not arrived when it is possible or desirable to write a text-book of logic for elementary students which departs vary considerably from the course that has been defined by university requirements in various parts of the world. Both in Eu- rope and in America instruction in this subject has to a large extent been controlled by what may be called the classical tradition of which Aristotle and Mill are the two fountain heads. In some quarters this fact has operated as a hardship, and has led to open, if rather one-sided, criticism of the subject’s educational usefulness, on the one hand, and has directed attention to and aroused interest in the real and supposed defects of the traditional logical doctrine, on the other.

The position both of those who maintain the conservative attitude, and of those who would substitute for the old some new kind of logic, is capable of defense up to a certain point, and there is no doubt that the stirring of the academic waters on this subject will result at some time in larger freedom in the choice of the material and methods of logical instruction, and to that extent will reduce the possibility of attributing to the subject the imperfections of temper and understanding of those who teach it.