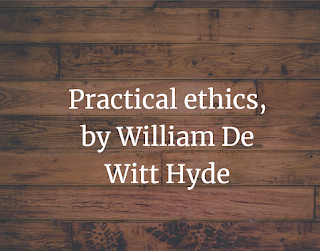 The steady stream of works on ethics during the last ten years, rising almost to a torrent within the past few months, renders it necessary for even the tiniest rill to justify its slender contribution to the already swollen flood. On the one hand, treatises abound which are exhaustive in their presentation of ethical theory.

On the other handbooks is plenty which gives good moral advice with great elaborateness of detail. Each type of work has its place and function. The one is excellent mental gymnastic for the mature; the other admirable emotional pabulum for the childish mind. Neither, however, is adapted both to satisfy the intellect and quicken the conscience at that critical period when the youth has put away childish things and is reaching out after manly and womanly ideals. The book which shall meet this won’t have a theory; yet the theory must not be made obtrusive, nor stated too abstractly. The theory must be deeply embedded in the structure of the work; and must commend itself, not by metaphysical deduction from first principles, but by its ability to comprehend in a rational and intelligible order the concrete facts with which conduct has to do.