Mystics of the renaissance and their relation to modern thought, including Meister Eckhart, Tauler, Paracelsus, Jacob Boehme, Giordano Bruno, and others 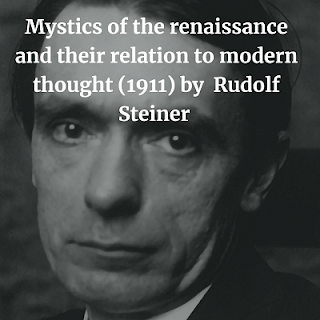 The matter which I am laying before the public in this book formed the content of lectures which I delivered last winter at the Theosophical Library in Berlin. I had been requested by Grafin and Graf Brockdorff to speak upon Mysticism before an audience for whom the matters thus dealt with constitute a vital question of the utmost importance. Ten years earlier I could not have ventured to fulfill such a request. Not that the realm of ideas, to which I now give expression, did not even then live actively within me. These ideas are already fully contained in my Philosophy of Freedom (Berlin, 1894. Emil Felber). But to give the impression to this world of ideas in such wise as I do today, and to make it the basis of an exposition as is done on the following pages — to do this requires something quite other than merely to be immovably convinced of the intellectual truth of these ideas. It demands an intimate acquaintance with this realm of ideas, such as only many years of life can give. Only now, after having enjoyed that intimacy, do I venture to speak in such wise as will be found in this book.