The adventures of Don Quixote (1912) abridged from the original edition by W.M. Thackeray with Illustrations 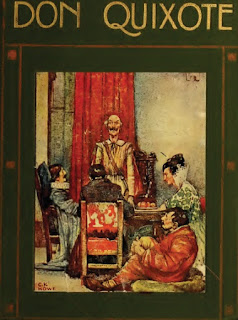 The plot revolves around the adventures of a noble (hidalgo) from La Mancha named Alonso Quixano, who reads so many chivalric romances that he loses his mind and decides to become a knight-errant (caballero andante) to revive chivalry and serve his nation, under the name Don Quixote de la Mancha.
Cervantes, Don Quixote. “In a certain corner of la Mancha, the name of which I do not choose to remember, there lately lived one of that country gentleman, who adorn their halls with rusty lace and worm-eaten target, and ride forth on the skeleton of a horse, to the course with a sort of a starved greyhound.”