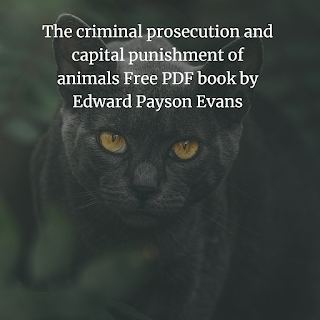 The present volume is the result of the revision and expansion of two essays entitled ” Bugs and Beasts Before the Law,” and ” Modern and Mediaeval Punishment,” which appeared in The Atlantic Monthly, in August and September 1884. Since that date the author has collected a vast amount of additional material on the subject, which has also been discussed by other writers in several publications, the most noteworthy of which are Professor Karl von Amira’s Thierstrafen und Thierprocesse (Innsbruck, 1891), Carlo d’Addosio’s Bestie Delinquent (Napoli, 1892), and G. Tobler’s Thierprocesse in der Schweiz (Bern, 1893), but in none of these works, except the first- mentioned, are there any important statements of facts or citations of cases in addition to those adduced in the essays already mentioned, for which the writer was indebted chiefly to the extensive and exceedingly valuable researches of Berriat-Saint-Prix and M. L. Menebra, and the Consilium Primum of Bartholomew Chassenee, cited in the appended bibliography. Professor Von Amira is a very distinguished and remarkably keen-sighted jurisprudent and treats the matter exclusively from a jurisprudential point of view, his main object being to discover some general principle on which to explain these strange phenomena, and thus to assign to them their proper place and true significance in the historical evolution of the idea of justice and the methods of attaining it by legal procedure.

Von Amira draws a sharp line of technical distinction between Thierstrafen and Thierprocesse; the former were capital punishments inflicted by secular tribunals upon pigs, cows, horses, and other domestic animals as a penalty for homicide; the latter were judicial proceedings instituted by ecclesiastical courts against rats, mice, locusts, weevils, and other vermin in order to prevent them from devouring the crops, and to expel them from orchards, vineyards, and cultivated fields by means of exorcism and ex-communication. Animals, which were in the service of man, could be arrested, tried, convicted, and executed, like any other members of his household; it was, therefore, not necessary to summon them to appear in court at a specified time to answer for their conduct, and thus make them, in the strict sense of the term, a party to the prosecution, for the sheriff had already taken them in charge and consigned them to the custody of the jailer.
[Download This PDF Book ##download##]