Download The government of man; an introduction to ethics and politics PDF book (1913) by George Sidney Brett. 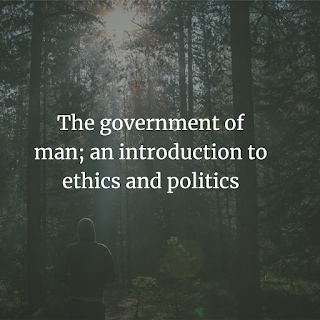 Excerpt:
The life of the individual is a series of events more or less capable of becoming a system. As a rule, the life of the child is less organized than that of the adult, and maturity is the period of greatest organization. There are, of course, many different types of organization: in some cases, a high degree of concentration upon a single idea or purpose will produce an exact adjustment of every other part of the person’s life to this one end; and this may occur very early in life.
Still, in reference to the average man, it is true that life exhibits a process towards the system, and we may accept the formula that life begins in action and ends in conduct. Conduct, in this terminology, signifies action brought under a rule and corresponds therefore to what we mean by moral as opposed to non-moral action. In this context moral means simply ” regulated by a principle.” The distinction of goodness and badness does not appear until we distinguish within the sphere of moral action the species called good and bad. When that is done, the moral (as opposed to the non-moral) subdivides into moral and immoral.
The popular use of the term moral Hits its meaning to the idea of goodness in some particular reference; the wider meaning of the term survives only in certain technical phrases, such as ” the moral sciences.” This degeneration of the word is very intelligible, for in the last resort conformity to a particular system of ideas has always been the essence of morality, and being ” good ” has generally meant being in agreement with other people’s views.